It wasn’t exactly ideal weather to begin an October beach vacation. A low pressure system, driven by the northernmost bands of a hurricane, had started to bear down on the mid-Atlantic. We had driven three hours and unpacked our gear in wet and gusty winds. After finally getting settled and eating a spaghetti supper with the family, five-year-old Hudson was raring to go. “Lolli, can you please take me to see the ocean?” he pleaded.
We were just two houses from the beach, and since there was a brief lull in the rain, I easily said yes. “It’s chilly and windy,” I said, pulling his blue hoodie over his head and tightening the strings on mine, figuring we had at least 15 minutes before the sky unloaded again. He flew out the door and ran ahead, skittering over the boardwalk and leaping onto the dunes between the sand fences like a calf released from its stall. I followed as quickly as I could, shouting into the bracing wind, “Hud, wait for me! The waves are really rough – don’t get too close to the water!”
It was just an hour before dark, and the sea was agitated and foaming at the mouth. Gray clouds churned ominously overhead. The wind was dramatic and invigorating, and Hud took off, chasing and retreating from the sudsy white edges of the water like a human sandpiper. 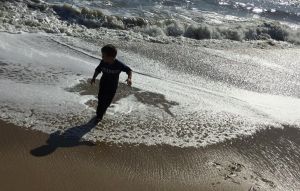 We had the beach all to ourselves, and his joy was irrepressible and contagious. We laughed and kicked up sand and water, and I threw back my hood and let the wind splay my thick, layered hair into stiff, outward spikes. “Does my hair look funny?” I shouted.
His laughter penetrated through the roar of the waves. “Yes!” he shouted back. When I captured him later and bent down to roll up his soggy pant legs, I realized the shifting sands and divergent waves had disoriented us and pushed us pretty far down the beach. “Hud,” I said, pointing way up the beach. “See that brown house with the yellow one beside it? Right between them is how we get back to our place. Let’s keep an eye on that spot, okay?” He nodded and took off again as I nudged him northward.
I stopped to catch my breath, my arthritic back and knees reminding me it had been a long time since I was five years old. I studied his lithe, fleeting form, effortlessly whizzing past me like I was a stalled car on the highway. The clouds unburdened themselves a little, and our hoodies darkened with raindrops. But neither of us were ready to leave.

As the light grew even darker and the rain a little heavier,  I marveled at this gift of a grandson, who opened my heart back up 18 years after it sealed shut upon the death of my youngest daughter. And then I sank so deeply into the thought that I started to cry. I felt the jaws of time clamping down on me, even as they yawned wide open for him, the weight of my life experience sinking far below the featherlight happiness of his fresh, expanding world. Would he visit me in a nursing home someday? Would he giggle to his siblings about my dementia, look on in horror at my missing teeth . . . cry at my funeral? Would he remember this night? Would I?
Stay in this moment! I ordered my heart. But how could I convey my deep and effusive love for him – this boy who, age-appropriately, squirms out of my hugs and prefers high-fives?

I breathed in the energy of sand, wind, rain and sea, and this small, darting human still looping and spinning around me. I knew I could crush him with the weight of my feelings if I wasn’t careful. So standing there at the edge of the continent, I mentally switched tracks and remembered that it wasn’t just time that was moving at a dizzying pace. In just 24 hours, we would each have rotated with the earth a distance of close to 25,000 miles at a speed of something like 1000 m.p.h., which meant that, in just our short time together on the beach, we would have traveled about 500 miles in space.
It felt like my heart had already gone twice that far. I willed it to come back and give him a blessing instead of this lachrymose longing:
Go, Hudson, go! Let my love lift, and not ever restrain you! May all the energy in your legs, heart and mind carry you far and bring you and the world as much joy as they’re bringing you and me right now. And may you reciprocate my love not by piling it back onto me (well, maybe a little), but by passing it on to your own children and grandchildren. And like it or not, girl cooties notwithstanding, I am kissing you now, and I’ll be kissing you forever, with all my love and gratitude for you.
“C’mon, buddy!” I finally shouted. “It’s getting dark; time to go back.”
He sped past me and raced up the sloping dunes, his body not having stopped once in the half-hour we were out there.
Without even looking back to confirm with me, he correctly threaded himself between the brown and yellow houses and disappeared from view.

Note: I didn’t have my camera with me that first stormy evening on the beach, but I was able to capture Hud on a sunny day a few days later – much as he was that first night.